Posted April 16, 2014 – On Breaking the Cycles blog by Lisa Fredericksen

On Life’s Terms: Mothers in Recovery is a powerful documentary film by Sheila Ganz. In her guest post below and through her blog, OnLifesTerms.org, Sheila introduces readers to this film, which she created to raise awareness about what needs to happen in order to help mothers struggling with addiction keep their children while they pursue treatment for their disease. Thank you Sheila for sharing your work! 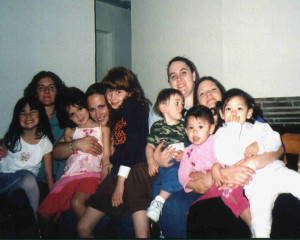 Mothers and children featured in the documentary, On Life’s Terms: Mothers in Recovery. Courtesy: Sheila Ganz

Fear of prosecution and losing custody of her child can stop a pregnant woman with a substance use addiction from seeking prenatal care.  I made the documentary On Life’s Terms: Mothers in Recovery to elevate the voices of mothers with substance use problems through the story of five mothers struggling to keep their children as they battle addiction in a women and children’s residential treatment program in San Rafael, California.  Their intimate story reveals experiences with domestic violence, prostitution and incarceration, as they courageously step onto the path of self-sufficiency with integrity and pride.  Their three year journey is told against the backdrop of drug laws and policies impacting mother and child.

Pregnancy is a window of opportunity for a woman to turn her life around.  Reproductive heath care needs to ensure confidentiality for expectant mothers with substance use problems.  Gender specific treatment programs create the best chance for a healthy outcome for the mom, her baby and ultimately for society.

Making the Film – On Life’s Terms: Mothers in Recovery

Sheila Ganz, creator of the documentary film, On Life’s Terms: Mothers in Recovery

My first documentary Unlocking the Heart of Adoption explores the lifelong process of adoption for adoptees, birthparents and adoptive parents in same race and transracial adoptions with illuminating historical background.  The film aired on public television (2003-2005) and The Documentary Channel (2012-2014), and is distributed to adoption agencies, educational institutions worldwide through the film’s website.  Recipient of the Congressional Coalition on Adoption, Angels in Adoption Award.

The film comes out of my experience as a birthmother.  In 1969, I was pregnant and in a home for unwed mothers.  Though I really wanted to keep my daughter, I was given no choice but to relinquish her for adoption.  It was devastating and I lived for the day when I would find her and tell her I love her.  After a long search, I found her when she was 19.

For my next film, I wanted to find a program that helps mothers keep their children.  Research led me to the Center Point, Inc. women and children’s residential treatment program in San Rafael, CA, just over the Golden Gate Bridge from San Francisco, where I live.  I met with Dr. Sushma Taylor, CEO and the VPs, and they gave me permission to make the film.

I went to the program without a camera to meet the moms.  We sat in a circle and shared our experiences.  We made a connection.  I went a second time and screened Unlocking the Heart of Adoption for them.  Then, I passed around a paper and asked for volunteers.  I feel fortunate that the women have a range of stories to tell.

Rachel, 22, escaped her abusive boyfriend with her two babies and went directly into the program.  Lisa S, 41, from an alcoholic family served time for selling drugs and petitioned the judge to go into the program while she was pregnant.  Lisa R, 38, relapsed and is determined to make it for her two daughters.  Leslie, 31, charged with online prostitution and drug use strives to regain custody of her daughter.  Julia, 27, doesn’t want her son to end up in rehab.

Also in the film are the mothers of Leslie and Lisa R and her eight-year-old daughter, who express their thoughts about the impact of substance use on their loved one, and Lisa S’s boyfriend, who is struggling with addiction.  Harriett Gaines, Program Manager and a mom in recovery, and Dr. Sushma Taylor, CEO, provide a context for the program.

Challenges and Triumphs for Mothers in Recovery

In the six month program the moms learn recovery, parenting and life skills, and confront the difficult reality of how addiction put themselves and their children at risk.  They can have their children with them up to the age of five.

In the re-entry phase the women write their resume, learn job interview skills, get a job and save their money to move into the transition house, where they start a new life in the community.  Over the course of three years, the women must rise to the challenges of a new job, being a single mom, re-establish relationships with family, fend off temptation to use alcohol and drugs which are everywhere, meet a commitment in drug court and graduate from the Center Point program.

Interwoven with the women’s stories is the progression of drug laws and policies that impact mother and child.  Since the 1986 mandatory sentencing drug law, the number of women in prison has jumped 400% and 800% for African American women.  Among incarcerated women today 66% have children under the age of 18.

Many of the symptoms of addiction for women tend to be inner directed including anxiety, shame and depression.  She may self-medicate due to trauma.  As a result, there is a need for, and benefit to, gender specific services for women that recognize the complexities in the relationships she has with her family, community and her children.  Addressing these issues in a safe supportive environment plays a vital part in her recovery.

The stigma is great, but the need is greater.  Today in America there are less than 150 residential substance use treatment programs for pregnant women and mothers with young children.  On Life’s Terms: Mothers in Recovery will raise awareness and encourage greater understanding about underlying issues of addiction for women, catalyze discussion on the need for substance use treatment vs. incarceration, and inspire women and men to seek recovery.

Please support the national outreach campaign for the documentary On Life’s Term: Mothers in Recovery here – Thank you!

Watch the trailers of Sheila’s films at – http://www.onlifesterms.org and http://www.unlockingtheheart.com.  Thank you!